We are always excited to share our success with you.
Stay up to date on how we are relentlessy making Pay2Home even better for you! 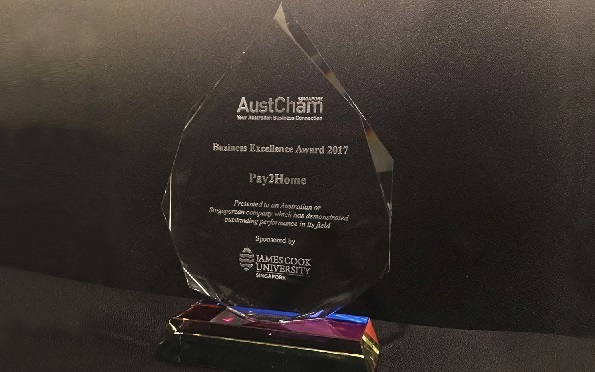 SINGAPORE, 16 June 2017 — Homegrown financial technology firm Pay2Home, a remittance and money transfer provider, on Friday (June 16) won the 2017 Australian Chamber of Commerce's Business Excellence Award for the most outstanding performance in its field. The accolade comes after the recent launch of its 24-hour multi-lingual Money Transfer Machines (MTMs) — a first for the remittance industry in Singapore — following the Monetary Authority of Singapore's approval for Pay2Home to roll out hundreds of MTMs to service the migrant and expatriate communities here.

Pay2Home was co-founded by Australians David Hulme and Wayne Salamonsen in Singapore in 2002. The Economic Development Board of Singapore took an equity stake in the business the following year while the Infocomm Development Authority of Singapore provided a grant to help develop the business. The co-founders attributed their success to Singapore's business environment and the Government's support of innovation.

"The winning combination of the ease of setting up and running a business in Singapore from a regulatory perspective, low tax, efficient Government support initiatives, and a solid technical and communications infrastructure, coupled with our Australian ingenuity and perseverance, have allowed us to create our special recipe for success," said Mr Salamonsen.

"We began as a fintech start-up in 2002 even before fintech was labelled as such, with one simple mission — to use technology as an enabler to create better products faster, with better economies of scale. And above all, listening to our customers, where business advancement is guided by their needs and not by fads or buzzwords," he added.